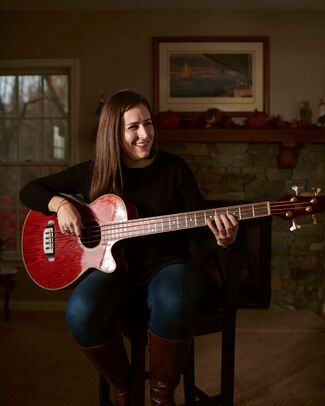 "True music must repeat the thought and inspirations of the people and the time." - George Gershwin

​With a passion for American musical culture and popular genres, Sarah Favinger developed herself as a contemporary musician who embraces where the classical and popular music worlds collide. Influenced early on by jazz, classic rock, and funk, Ms. Favinger has since traveled far and wide to develop her musical skills. She received her Bachelor of Music degree from James Madison University in May of 2012 in Music Performance. In August of 2015 she graduated with a double major Master of Music degree in Double Bass Performance and Music History and Literatures at Baylor University in Waco, Texas. While at James Madison and Baylor, she performed with the Symphony Orchestras, Wind Ensembles, Jazz Ensembles, Chamber Ensembles, and Theatre Departments. Ms. Favinger has also performed in several jazz groups in Maryland, Virginia, Texas, and Paris, France. As an electric bassist, she has performed in jazz groups, musicals, and with the Baylor Wind Ensemble. Her previous teachers and mentors include: François Rabbath, Sandor Ostlund, Samuel Cross, Adam Hopkins, and Joseph Fischer.

In 2016 she completed a year of intensive study at the International Rabbath Institute Paris with François Rabbath. In Paris, she actively performed in recitals at the Cité Universitaire and around the city as a soloist and in the jazz sphere, including a pair of Kurt Weill concerts with soprano Jennifer Linshield and at jam sessions. As a vocalist, Ms. Favinger has performed in a classical settings, previously with the Paris Choral Society, St. Louis Choir and in Assisi, Italy, as well as in jazz settings. Within the jazz vocal world she has performed accompanying herself on double bass, as a big band soloist, and with her former group Solid State.

Currently, Ms. Favinger resides in Brooklyn, New York, where she is using her versatility as a player and her passion for popular genres to carve out a space in a competitive musical environment. She primarily performs in pit orchestras with theater companies throughout New York City. She has performed at respected venues such as Carnegie Hall, Lincoln Center, and 54Below, as well as in several New York Musical Festival productions at the Signature Theater.  In collaboration with dancer and choreographer Melani de Guzman,  she has composed and premiered several new works for dancer and solo double bass. Their collaboration is constantly growing and in addition to organizing workshops, the duo has applied to several festivals nationwide. Ms. Favinger is also cultivating a studio of young bassists using the techniques she has learned throughout her education.

Notable international experiences include performing in the 2018 Toronto Creative Music Lab, winning a position in the Jeune Philharmonie Franco-Allemand for the 2016 season, and in 2014, Ms. Favinger was the double bassist for the Assisi Performing Arts Festival in Assisi, Italy. She has also performed with the Dali String Quartet - in Texas and Pennsylvania - and was a Camp Assistant at the Dali Quartet International Music Festival, where she performed in a chamber ensemble, coached a youth chamber group, and sat principal in the top orchestra. Other notable performances include the Midwest Band and Orchestra Clinic, and the Collegiate Band Directors National Association Conference, with the Baylor Wind Ensemble; the Texas Music Educators Association Convention, with the Baylor Symphony Orchestra; the Virginia Music Educators Association Convention, with the JMU Wind Symphony.

As a music historian, Ms. Favinger has researched 20th and 21st century popular music genres, primarily in the United States. She has researched Mary Lou Williams, Dizzy Gillespie, and Hazel Scott in depth. Her master's thesis was a discussion of vernacular Mass settings in the United States following the reforms of the Vatican II Council; the case studies are Mary Lou Williams' Mary Lou's Mass and the mariachi Mass La misa panamericana. Ms. Favinger continues researching the popular genres of American music, such as jazz, Broadway, and the trans-Atlantic migration of popular music and is passionate about combining her love of double bass with her musicological research.

In her free time, Sarah enjoys running as far as she can, reading all things historical, eating and drinking her way around the world with her friends, museum wandering with her boyfriend, Joe, and spending time at Bethany Beach with her family and their dog, Stella.
Proudly powered by Weebly